The magic strains of Howard Shore’s The Lord of the Rings trilogy soundtrack remain some of the most enduring ever, right up there with Star Wars and The Godfather in terms of recognition and enduring value. It’s hard to listen to Shore’s Shire theme, or Rohan’s war anthem, or Enya’s “May it Be“, and not immediately be transported back to the mythic realm of Middle Earth and its various, larger-than-life locales.

After viewing the first two The Hobbit trailers, I was a little bit concerned. So much of Howard Shore’s music sounded new, without so much in common with Shore’s LotR masterpiece. Fortunately, the new Hobbit soundtrack dispels all doubts quicker than Gandalf’s exorcist of Saruman-possessed Theoden King. While The Hobbit OST contains the appropriate amount of references to the previous trilogy, Shore flawlessly weaves in a number of new and interesting themes which, I suspect, will become just as enduring as their LotR counterparts. Among the highlights are Richard Armitage’s drawven “Misty Mountains” dirge, based on Tolkien’s own poem bound to become the central theme of the series. Listen to the soundtrack yourself by clicking on the image below: 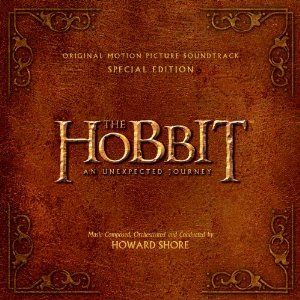